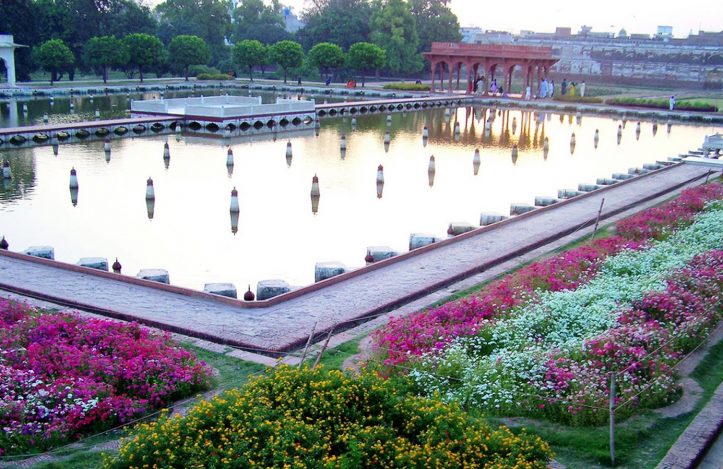 Mughal Era where has been described for various developments, its rule, the many years and the mistakes made by the rulers, it is also remembered for all the beautiful and historical architecture done mainly in the era of Emperor Shah Jahan. The beautiful yet complex mixture of Persian and Islamic architecture was completely built in 1641 A.D. The garden which is spread on 16 hectares is located in the eastern part of the Lahore city, Lahore is the historical city with many architectural sights from Mughal Era. Surrounded with walls which are carved with unique fretwork, the beautiful series of fountains, various building inside and combination of trees amplifies the beauty of this well known garden.

In the seventeenth century, mughal empire was successful to bring out such technical and unique architecture for the people which has not only marked history back then but also had become asset for the current nation and in 1981 the garden was named as one of the UNESCO World Heritage Site. This explains that this garden which is mixture of central Asian, Persian, Kashmiri, and Delhi sultanate is one of the famous remaining of the Muslim Rule in the subcontinent; it’s a beautiful essence of the muslim history that is resting in our land.

Initially Shalimar Garden was under the Arain Mian Family but as it was located in quite a prime location the garden got attention from the mughal architects who were interested in the place and wanted to bring it under the Mughal rule. The architects for the purpose forced the family to leave the place but then Shah Jahan, then Mughal emperor, gifted the family with the royal title of ‘Mian’ and along with it the family was given the governance of the garden and they successfully governed it for almost 350 years. One of the people from Shah Jahan’s court was managing the entire development.

It is also said that the Garden was made under the colors of Shalimar Gardens in Kashmir, which were built by Emperor Jahnagir, father of Emperor Shah Jahan.

Later in 1962, the Shalimar Garden was nationalized by General Ayub Khan as the martial law was imposed in the country. The famous Mela Chiraghan Festival which was used to held in the garden was also ended by the General during his rule.

Though the history behind the name is yet not confirmed but it’s said that the name is from Arabic heritage and is taken from Arabic expression ‘shah al-imarat’ which means master of building, this can be considered as the name and explanation for the name as there are many building which resitting inside the premises of the Shalimar garden and were constructed especially for the convenience of the royal family, there visitors and acquaintances.

Spread on a wide land of 16 hectares Garden consists of three terraces coming from south to north and have specific names, the top one is named ‘Farah Baksh’, the second one is called ‘Faiz Baksh’, and the last one is known as ‘Hayat Baksh.’ The entire plan is surrounded by red walls which are quite a sign of royal architecture. The walls inside the garden are high brick wall forming an parallelogram shape and are carved with beautiful and unique fretwork.

Fountains are one of the specialties of the garden, there are around 310 fountains standing high all across the garden and are distributed among all the three terrace. The unique and critical water system which was planned by then engineers, and which has been successfully running across the Shalimar Garden without failing, is quite a surprise for current architectures and engineers. One of the very popular importances of these fountains is that they maintain the natural temperature of the surrounding without any current technologies despite how harsh the weather is, as Lahore can have quite high temperature during summer, which is also the time of visit for many tourist, these fountains help in maintaining the temperature. There are 105 fountains on the upper terrace, the second one has 152 fountains and lastly, the lower level has 153 fountains.

Along with the beautiful walls, the three large terraces, and combination of fountains, Shalimar Garden is adorned with quite a lot of greenery. There are multiple trees planted all across the garden, Almond, Apple, Oranges, Peach, Mulberry, and Mango are few of the many which are planted on the widespread land of the garden giving beautiful and enchanting sight to all the visitors.

Lastly, the architecture of the garden is not completed without many buildings which are constructed within the premises of the garden, they were constructed for the convenience of the royal family. To name a few there are Khwabgah or sleeping chambers, Sawan Bhadun Pavilion, The Aiwan or the grand hall and more.